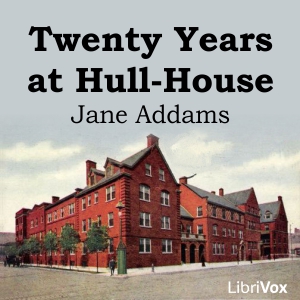 LibriVox recording of Twenty Years at Hull-House by Jane Addams.

Jane Addams was the first American woman to be awarded the Nobel Peace Prize. In a long, complex career, she was a pioneer settlement worker and founder of Hull-House in Chicago, public philosopher (the first American woman in that role), author, and leader in woman suffrage and world peace. She was the most prominent woman of the Progressive Era and helped turn the nation to issues of concern to mothers, such as the needs of children, public health and world peace. She emphasized that women have a special responsibility to clean up their communities and make them better places to live, arguing they needed the vote to be effective. Addams became a role model for middle-class women who volunteered to uplift their communities. This recording of her memoir Twenty Years at Hull-House commemorates the 100th anniversary of its publication, the 150th anniversary of Addams' birth, and was released on December 10th, the anniversary of Addams receiving her Nobel Prize. (Summary by Wikipedia and Elizabeth Klett)

Uploaded by librivoxbooks on December 10, 2010